We love Mexican food. It's fresh, easy, and budget-friendly. For these Fajitas, I like to use flank steak, but skirt or hangar steak (or even a london broil sliced in half horizontally) will be delicious. If you are so inclined, use boneless, skinless chicken. Be sure to slice the meat across the grain for tender Fajitas. The results will be fantastic! The key to making them irresistible is cooking the onions and peppers in a cast iron skillet.* Not only does it make your house smell incredible, the cast iron imparts a flavor no other pan can replicate. After you're done with the onions and peppers, just toss the meat into the same pan. Easy, flavorful, and delicious. Yum!

Blend all ingredients together in a food processor or blender until smooth. Place the marinade in a ziplock bag with ~1-2 lbs flank steak (or whatever meat you choose). Marinate in the fridge for a few hours (overnight is great) or, in a pinch, on the counter for about an hour, turning occasionally.

Before cooking, wipe off excess marinade** and spray the meat with oil.

Cook the flank steak in a cast iron pan for 3-5 minutes per side, to the doneness preferred. Let it rest for 10 minutes before slicing into thin slices across the grain. Serve with cooked veggies and warmed tortillas.

* Of course, grilling is perfectly acceptable, too. We eat these year round, so I just make them in a cast iron skillet so I don't freeze during the winter. :)

** I usually pour some of the leftover marinade onto the onions & peppers and reheat them to temperature while the meat is resting. Don't waste any flavor!! 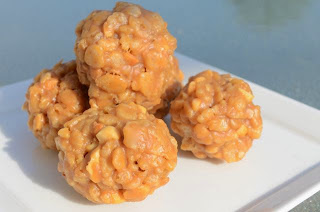 My family loves anything with peanut butter. I think it's genetic, but we would happily put peanut butter on just about anything. These Peanut Butter Krispies are adapted from Miss Mickey's Peanut Butter Balls, and they're deliciously crunchy and not too sweet. They make they perfect after-school snack.

In a large pot, heat brown sugar and corn syrup over medium heat. Stir frequently until the sugar is dissolved and the mixture just starts to boil. Turn off the heat and stir in the peanut butter; mix well. Add cereal and stir to combine. Remove from the heat and let cool enough to use your hands (or a small cookie scoop) to shape into balls ~1-inch diameter. [You'll need to compress them so they'll stay together, so if using a cookie scoop, you'll need to really pack it well.] Let cool completely and enjoy. Yields ~30-35 balls

Note: You may be tempted to add chocolate chips to these, but they will melt and become extremely messy (though tasty) if you do. Instead, add 1-2 Tbsp. cocoa powder to the sugar/corn syrup mixture with the heat off before stirring in the peanut butter.
Posted by Pam at 2:30 PM No comments:
Email ThisBlogThis!Share to TwitterShare to FacebookShare to Pinterest
Labels: peanut butter, snacks


After an entirely too long sabbatical (and two more children), I'm hopefully back to blogging regularly. I have lots of recipes to share!
Posted by Pam at 1:33 PM No comments:
Email ThisBlogThis!Share to TwitterShare to FacebookShare to Pinterest

This is my new favorite veggie dish. It's a bit late in the year, but you might find some fresh veggies at farmer's markets. Easy and delicious, this is a great way to convert non-veggie eaters. I've even added a can of canellini beans to make it a complete meal. You can also pour over pasta instead of serving with toasted bread. It makes quite a bit, but that's okay since it's great warm or at room temperature (i.e., leftovers for lunch the next day!).


Pour the canned tomatoes into a 3 1/2-quart baking dish and spread to cover the bottom. In a large bowl combine the remaining ingredients (not the bread). Toss to coat. Pour the vegetables over the canned tomatoes in an even layer. Cover the baking dish with foil and bake for 20 minutes. Remove the foil and bake until the edges of the vegetables are golden, about 30 to 40 minutes.


Serve alone as a side, or over toasted sourdough bread or pasta for a main dish.

Adapted from Giada de Laurentiis
Posted by Pam at 7:38 PM No comments:
Email ThisBlogThis!Share to TwitterShare to FacebookShare to Pinterest

You've probably heard of Ree Drummond (aka The Pioneer Woman); perhaps you've even seen her blog or tv show on Food Network. Well, her recipe for cinnamon rolls captured my attention quite a while back. It makes a lot (if using the full recipe), and they're really delicous. I've added my own spin and think I've come up with a near-perfect cinnamon roll. The frosting/glaze is still a work in progress, but this is pretty close to perfect for me. She says they can be frozen at any point in the process, but I prefer to bake and glaze mine before freezing. When you reheat them, the glaze soaks into the rolls, allowing you to add more frosting before serving. Y.U.M.

Mix the milk, vegetable oil and sugar in a pan. Scald the mixture (heat until just before the boiling point). Turn off heat and leave to cool 45 minutes to 1 hour. When the mixture is lukewarm to warm, but NOT hot (i.e., between 100F-110F on a thermometer), sprinkle in both packages of Active Dry Yeast. Let this sit for a minute. Then add 8 cups of all-purpose flour. Stir mixture together. Cover and let rise for at least an hour.
After rising for at least an hour, add 1 more cup of flour, the baking powder, baking soda and salt. Stir mixture together. (At this point, you could use the dough immediately; however, I cover & refrigerate the dough at least overnight before using-no more than 2 days, though. Watch to make sure it doesn't overflow - you can punch it down if needed.)
When ready to prepare rolls: Prepare your pans with butter on the bottom & sides (a pastry brush works well.) Set aside.
Sprinkle rolling surface generously with flour. Take half the dough (1/6th if making mini-rolls) and form a rough rectangle. Then roll the dough thin, maintaining a general rectangular shape. Drizzle melted butter over the dough to cover - a pastry brush works well to spread it evenly. Now sprinkle sugar over the butter followed by a generous sprinkling of cinnamon.
Now, starting in the middle, begin rolling the dough in a neat line. After you have a roll started, roll from one end across, keeping the roll fairly tight as you go. Next, pinch the seam of the roll to seal it.
Then begin cutting the rolls approximately ¾ to 1 inch thick and laying them in the buttered pans.
Repeat this process with the other part of the dough. Let the rolls rise for 20 to 30 minutes (or until nearly doubled in size), then bake at 350F degrees until light golden brown, about 20-25 minutes.
For the frosting, mix together all ingredients listed and stir well until smooth. You want it thick but pourable/spreadable. Taste and adjust as needed. Generously drizzle over the warm rolls.

Recipe adapted from The Pioneer Woman
Posted by Pam at 11:03 PM No comments:
Email ThisBlogThis!Share to TwitterShare to FacebookShare to Pinterest

I thought I'd found the perfect recipe for granola. That is, until I had the granola from the Topside Inn in Boothbay Harbor, ME. Dark and flavorful, it was perfect on its own or with yogurt. The hosts were gracious enough to share the recipe with me. I tweaked it just a bit, and it really is hard to decide if my 'Best Granola Ever' claim can stand against this recipe.

We'll just call it a tie.

Cook in microwave* on high until hot but not boiling (5-7 minutes), and then stir.

Pour over dry mixture and stir well, coating all of the dry with wet ingredients. Pour mix into 2 large prepared sheet pans (sprayed lightly with oil) and spread evenly.

Place pans into preheated oven and set timer for 15 minutes. Remove pans from oven and stir well, especially from corners of pan. Repeat 3 more times for a total of 4 baking sessions. Watch carefully after two baking sessions; the last two sessions may need to be shorter to avoid burning. It should be dark & golden brown.

Cool on the pan, using a spatula to stir periodically to avoid big lumps.

Store in airtight container in the refrigerator, or also can be frozen in heavy zip-lock bags.

From the Topside Inn, Boothbay Harbor, ME
Posted by Pam at 8:17 AM 6 comments:
Email ThisBlogThis!Share to TwitterShare to FacebookShare to Pinterest 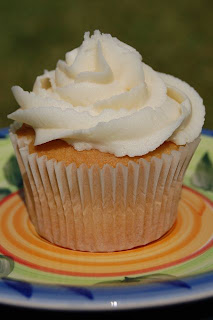 I'm a sucker for a recipe. I follow them pretty much exactly, especially the first time I make something, so it's odd that I'd come up with something new that worked perfectly the first time. So perfectly (and deliciously addictive) that we dubbed them Crack-Cakes and two dozen cupcakes, um, 'disappeared' from our house within 36 hours. You eat one, and it's pretty good. Soon thereafter, you have to have another one. The maple buttercream frosting is out of this world. My culinary muse certainly earned her wings that day.
Or something like that.
Just make the cupcakes.
(But make them for an event/gathering or your scale will be unhappy with you.)

Mix thoroughly & bake according to package directions for cupcakes.

Mix thoroughly until smooth. This is better the next day, so I recommend making it in advance. Store in the fridge in an airtight container; bring to room temperature and re-whip before using.
Posted by Pam at 4:35 PM No comments:
Email ThisBlogThis!Share to TwitterShare to FacebookShare to Pinterest 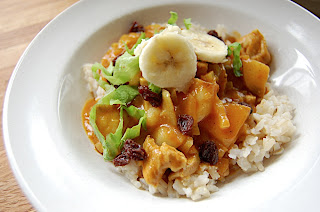 **Updated**
I received this recipe from our Best Man's mom. She grew up in South Africa, and while I don't know exactly where she got this recipe, I think it's got some African tones to it (I'm thinking Moroccan, but what do I know? I've never been there!) It can be served over rice, but don't forget the condiments! I really like it with banana, raisins, & lettuce.

I haven't made it in the slow cooker before, but I think it'd be an excellent dish to try with that method. Also, since it makes quite a bit, it freezes really well. Try it. It's delicious!

Add margarine/butter and oil to a large, wide pan or pot. Saute onions until translucent. Add garlic & cook ~30 seconds before adding remaining spices, pickle, worchestershire, lemon, 2 cups water, and boullion. (Can mix together in a bowl before adding to the pan.)

Add chicken & potatoes and bring to a boil. Turn down to low or med-low and simmer until chicken and potatoes are tender. Serve with rice, chopped banana, raisins, tomato, lettuce, and/or coconut.

Note: This is even better the next day!

Recipe courtesy S. Dee
Posted by Pam at 3:36 PM No comments:
Email ThisBlogThis!Share to TwitterShare to FacebookShare to Pinterest
Older Posts Home
Subscribe to: Posts (Atom)
I am not a food snob, but I am a foodie. Many people asked for my recipes, so I've shared them here. Most recipes listed have been tried multiple times with much success and rave reviews from friends, family, & acquaintances. I started this way back in 2006, and after a 3+ year sabbatical I hope to share recipes regularly again. (We'll see how that goes as a mom of 4!) :)